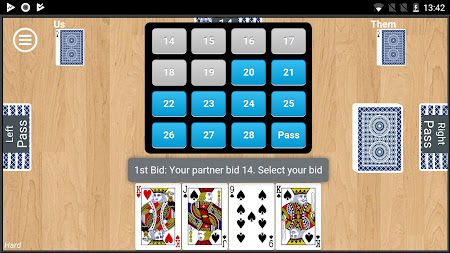 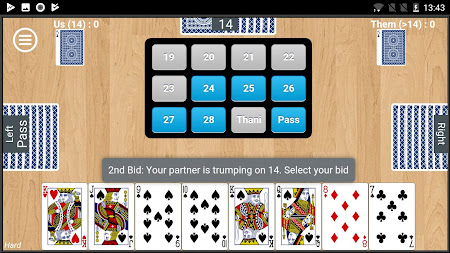 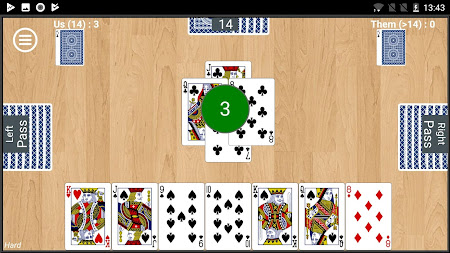 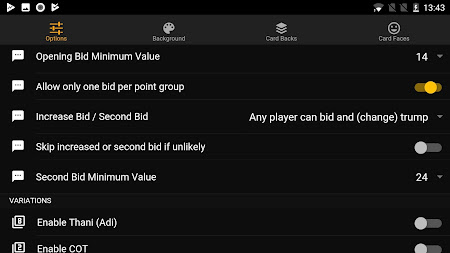 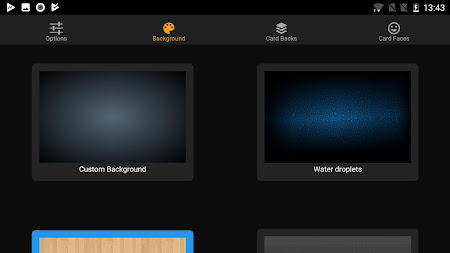 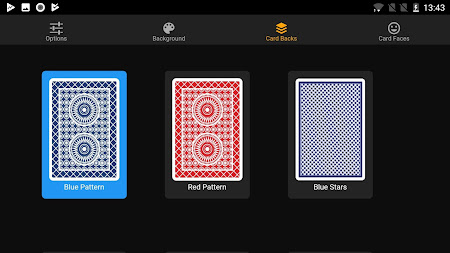 28 is usually played by four players in fixed partnerships, partners facing each other.

32 cards from a standard 52-card pack are used for play. There are eight cards in each of the usual "French" suits: hearts, diamonds, clubs and spades. The cards in every suit rank from high to low: J-9-A-10-K-Q-8-7. The aim of the game is to win tricks containing valuable cards. The values of the cards are:

Jacks 3 points each
Nines 2 points each
Aces 1 point each
Tens 1 point each
Other cards (K, Q, 8, 7) no points
This gives a total of 28 points for cards, hence the name of the game. Find detailed rules in the App.
Based on rules as per https://www.pagat.com/jass/28.html

Game Features:
1. Easy and Normal Difficulty
2. Play with standard rules or optional variation for 2nd bid
3. Change speed of game flow
4. Customize Appearance (background, etc)
5. Choose how the deck is shuffled – can be lightly shuffled to preserve it to the way they fell in the previous hand.
6. Customize the app to the way you play via Options.
– Change minimum 1st bid value
– Change minimum 2nd bid value
– Enable 1 bid per point group (14-19, 20-23, 24-28)
– Includes "Thani" can be enabled/disabled
– When bidding against Partner allow player to the right to bid before you.
– Bidder can't play/stuff trump suit in a non-trump lead trick if trump was not revealed
– Bidder must play/stuff the face down Trump Card when revealing trump
– Opening Bidder can ask for a redeal if the first 4 cards received are pointless
– Disallow playing/stuffing Jacks before its suit is lead
– Show/Hide accumulated points during play

Various options available to customize the app. to the way learnt the game!!!

This article comes from the Internet and does not representludo king mod apkPosition, please indicate the source for reprinting：https://www.yupeee.com/17444/28-card-game-twenty-eight-2-04-apk-free-card-game-apk4now/
1like