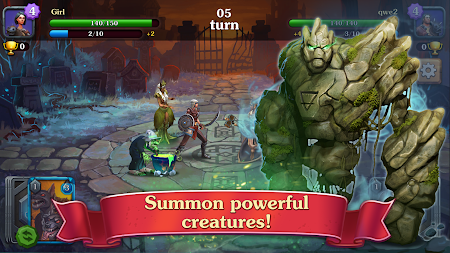 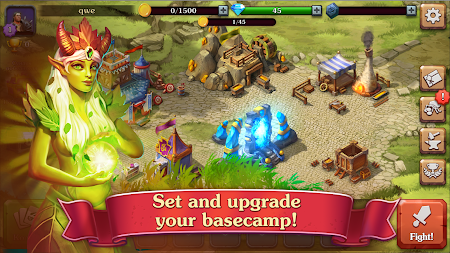 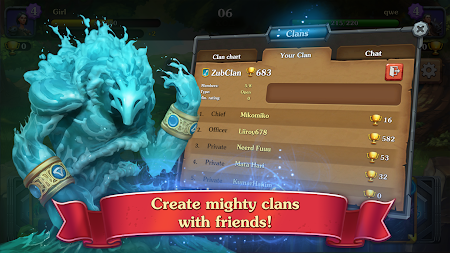 “Cradle of Magic” is RPG game, in which battle arena is combined with the Collectible Card Game – CCG.

The deck of cards is the main weapon of a player in the battle arena. Battle cards have to be combined between each other and also effectively reconciled with the hero’s weapons for battle. You can collect, upgrade magical cards, trade them with other players and even seize them in battles.

HERO
—> Develop your hero: equip the hero with powerful armour, epic weapons, battle cards and magic items
—> Lead card wars with other players online, attack the opponents, fight with friends, climb up the top of the rating
—> Challenge the strongest and become the first hero of the Cradle of Magic!

CLANS
—> Team up with your friends in clans and become invincible on battle arena RPG
—> Exchange battle cards with friends, get experience and gold for it!

GAME FEATURES:
* Unique system of card warfare online RPG
* 4 schools of battle cards: Undead, Demons, Nature and Element
* More than 50,000 combinations of the deck
* Battles with other players around the world on battle arena RPG online
* Ability to play in social networks and on mobile devices

About the world
The game takes place in the medieval world. Mysterious meteorites fall on the ground, filling the life of ordinary people with magic. With the advent of magic, the heroes appeared, who soon mastered the new forces, and the war of heroes broke out. All over the world the battles of the magicians began. Armed with magic cards, heroes started summoning magical creatures on the battlefield and casting powerful spells. The world was filled with unknown creatures of incredible power. Magical power has become available to everyone, but only the one who can turn magic in his own interests will rule the world.

The online game "Cradle of Magic" is in the final stage of beta testing, if you have any questions or suggestions, please write to [email protected]

And do not forget: The one who owns the Magic – owns the world!

An interesting feature of the game is a system of card warfare "Combo": when playing cards in a certain sequence, the corresponding positive effect is activated.
"Totem Power" – if there is any totem on the PvP arena, the next summoned totem will summon a lightning that damages the enemy hero
"High Elemental" – two identical Elementals are combined into one very powerful monster
"Kidnapping Life" – all creatures of the Undead take away the health of other cards when they are attacking at the battle arena
"Hell Pack" – if there is Orth on the field of card battle, the next summoned Orth will give an additional attack to the first one
"Sacrifice" – if there is an Imp on the PvP arena, the called Succubus consumes it and increases own strength
"Caleidoscope" – if you play 3 battle cards of various schools of magic in a row, the hero obtains additional mana
Disputes – poisonous disputes spread throughout the battle arena after the death of the victim

The full list of available Combo is listed in the game menu – "Collection of cards".

*The game is free and available in English online

This article comes from the Internet and does not representludo king mod apkPosition, please indicate the source for reprinting：https://www.yupeee.com/17494/cradle-of-magic-card-game-battle-arena-rpg-1-5-11-apk-free-card-game-apk4now/
0like